Trekking in the Baliem Valley: Preamble 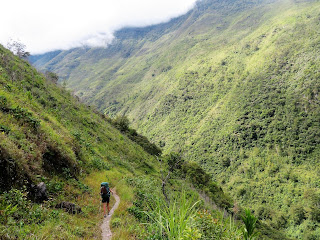 In June 2018, my wife and I went to Papua for a 6-day trek in the Baliem Valley. What shocked me prior to going, was the absolute vacuum of detailed information – especially critically important things like maps! – on trekking in the Baliem Valley. I, perhaps like many, got the idea of hiking in the Baliem Valley from reading the Lonely Planet guide, but sadly, the guide does not provide the detail required to actually plan an independent (i.e., unguided) trip. That said, I, probably like everyone, turned to the internet. Again, shockingly little out there, with the exception of a few sources (see “credits” section below).


Long story short: after having done our trip, and having had an amazing experience, and GPSing our route, I feel obliged to share what we learned. So that’s what this is about. This is a detailed account of exactly what we did, with maps and GPS coordinates, along with tips and advice someone planning an unguided trip might find useful.


That said, this is not intended as the complete guide to trekking in the Baliem Valley (that would be somewhat presumptuous), but rather, is intended to be very helpful to a person planning an independent, unguided hiking trip to the Baliem Valley. Specifically, you should be able to repeat our route very easily given the information below (and it’s a good route J).
Rob D'Eon, July 2018.

EPILOGUE: Below is a trip report from a couple who completed a multi-night hike in the Baliem Valley in September 2019. It illustrates the "interesting" local situations one may encounter.
TRIP REPORT (SEPT 2019):
We started our trip on a Sunday which was probably not the best day as there were no taxis that could drive us to the starting point Kurima. But after a while we found some really nice guys with a van who drove us to Kurima. On the way was a landslide which covered the street but the guys were really cool walking through the ‘river’ to guide the jeep to the other side.

In Kurima, after sharing some cigarettes, we started hiking to Tangma. The first part was so amazing - all the flowers (it was way more colorful than we expected) and the views. Then, it started raining and the trail got really slippery. The descent to Tangma was so difficult. We hiked together with the parents of my boyfriend and although they are quite fit, they reached their limits.

Arrived in Tangma we were the attraction. The whole village came to see us and everybody wanted to help but no one spoke English - except for this one guy who then translated everything. He also offered us a place to sleep and we got plenty of food (rice and some kind of pumpkin, I guess). He travels to get books and teachers for the schools in the Baliem Valley.


The next day we started early towards Wesagalep. The first part was easy, then it became steeper and steeper downward to the river. We were so happy that the rain has stopped. But it was very hot. I loved the bridge over the Baliem River. And then we walked up again. The view was wonderful. We stayed the night in Heipa (a small village before Wesagalep). The mood was tense in this village. They told us about a fight in Wamena between the Papuans and the police, and that the airport was destroyed - luckily this was not true, but we were so shocked and had a really bad night.
The next day, the parents of my boyfriend arranged porters which could only helped us until the top of the hill as they are in a fight with the people on the other side. They were really afraid of going too far and carried a bow and arrows. Most of the way was through the rain forest which was so green and full of live. Also the shadow was pleasant. On the top of the hill we had a really nice break with them and said goodbye.
The way down to Wemasili (a village before Wuserem) was steep but with nice trails. We met two friendly people who talked us into staying in Wemasili instead of Wuserem. It was already late and they told us about another landslide so we stayed there. Here we got many ubis (but we were prepared with our spices) and slept in a church which was cool.
Then, we decided to shorten the trail and so our next village was Sykosimo. On the way were many landslides which made the beginning difficult but the second part was easy to walk. So we arrived in Sykosimo early. It was relaxing to arrive around noon. The people there were so amazing. They offered us two! rooms with mattresses! and showed us there art (necklaces, bracelets, headdresses). We played a card game and the whole village watched. I think I never got used to all the people watching us but it was fun though. Dinner was rice, pumpkin and ubi and we tried communicating with our little Bahasa Indonesia.
The next day, we crossed the footbridge over the Mugi River. This bridge is built only of liana and looks amazing and more trusting than the other one. We walked a lot uphill and it was so hot again. Then we saw a plane and then another and our mood got better and better. And after Inkinim we walked downwards until Seima where we spent the last night. The woman was friendly and we got lunch and dinner, also bacon and had coffee with her family. The funny thing was that her husband is pastor in the close by churches and we met him earlier in the other church. They showed us pictures of their parties on their smartphones. This is so surreal that the people mostly live from the things they plant but have smartphones (and no signal).
The last day was only a short hike to Sykomo where we took a car to Wamena. We were so nervous what to see from the fights and it was really bad. The whole market was burned down. Everywhere were burnt mopeds, cars and houses. The Indonesian people were flown out, our hostel host was Indonesian so we arrived at a closed hostel where we had left the stuff we did not need for the hike. After a few hours, however, we could get out stuff and spent the last night at a fenced in house of a Dutch man. The next day we got our delayed flight and we really looked forward to spend some relaxed days in Raja Ampat.
Anna, March 2020.